While many runners are fueled by a love of the sport or a desire to stay in shape, many others are driven by a desire to win and compete. For a vegan runner, with the combination of these two goals with proper planning and training, winning becomes easier. Some of the best runners in the world are the ones that eat Vegan food. You may not be able to match the times of elite vegan athletes, but you can follow their training and diet tips to help you achieve your goals. There are various kinds of diets in the world. Most famous is a

More than 90% of the world population is non-vegetarian who mainly consume meat products. It has to be kept in mind that whatever concerns are voiced are from a predominantly omnivorous society. As the number of vegans is increasing globally, all these concerns are also felt as unfound.

Only 10 percent of the population is Vegetarian, and that includes Flexitarians who Eat Meat occasionally, Pescatarians who eat Fish and fish products as well.

This is mainly a plant-based diet that includes animal products like milk and eggs. Due to these two, the nutrition value or the energy intake of this diet is considered as good as non-vegetarian. Rather it is considered more healthy by some. Vegetarians have less incidence of heart attack, blood pressure, type 2 diabetes, and cancer. They also have a lower body mass index and less obese. Lacto Vegetarians – Includes Dairy but not eggs.

Are against any cruelty against animals, whether for consumption or any other use. As of today, less than 1% of the world population is vegan. Vegan is a way of life, and Vegans believe in excluding all kinds of animal exploitation. The diet is strictly plant-based. Veganism is comparatively a new phenomenon. Donald Watson coined the term in 1944, the co-founder of Vegan Society. Some people, rather non-vegetarians, don’t consider it healthy due to the lack of even milk and milk-based products and eggs. As quoted by non-vegetarians about the vegan diet, the main concern about plant-based nutrition is protein intake and various micronutrients.

While there are enough plant protein sources like legumes, beans, grains, nuts, soy, peanut butter, etc., for fulfilling protein requirements, the protein from these sources is not as complete as animal-based protein. No plant-based protein is complete in terms of essential amino acids as whey, egg, or other animal sources. But when we combine foods like beans with rice, having both together, they become an excellent source of complete EAAs. This kind of food combination is eaten for ages in vegetarian societies in countries like India, and their nutritional intake is much more. So if we do have such combination foods, we can fulfill all our nutrient needs. It rather has much more micronutrients like vitamins and minerals. There is only one main concern: Vitamin B12, which cannot be completed from any source as it is animal-based. But these fears are unfounded as well. There are a whole lot of foods available to fulfill B12 as well. 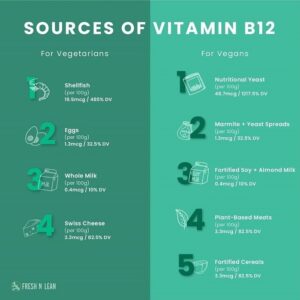 https://www.freshnlean.com/blog/vegan-b12-sources/Vegan Runners – So there are a whole lot of foods for elite athletes. Some Doctors believe that daily intake of Vegan diets are better for endurance athletes. Mainly consisting of fruits, nuts, legumes, and grains, these contain phytonutrients that effectively reduce inflammation of muscles after training sessions and long runs. As a result, it can help more efficiently recuperate, prevent muscle damage, strengthen your immune system, and improve stamina. Vegan elite runners believe that vegan as a diet choice helps them recover faster. We have to believe them as almost all were non-vegetarians earlier. Scott Jurek, the elite ultra-marathon runner, mentions in his New York Times bestseller ‘Eat and Run’ that the key to his extraordinary success is Vegan Diet. If you look at the numbers, Vegans among ultra-marathoners are much more as a percentage to total runners than vegans to the total population. Though people are becoming aware of the benefits of the LOV(Lacto-Ovo vegetarian) diet and agree that it is a properly balanced diet, most are still skeptical about the vegan diet. Still, veganism is increasing rapidly, and the best part is that recreational endurance athletes are adopting it at a much faster rate. Vegan food is deemed to be the source of protein and is not processed through an animal first, whereas the protein we get from animal foods like beef, pork, or other non-vegetarian food is considered to be the secondary source as the plants are processed in their bodies to supply us animal protein. Athletes are shifting to veganism to optimize carbohydrate intake for improved performance and better weight management. With increased Carb intake, glycogen stores in the body improve, thereby enhancing performance. Increasing plant foods increases phytochemicals and antioxidants, which in turn improves immunity and reduces oxidative stress. Foods like vegetables, oats, and non-citrus fruits are great for reducing intramuscular acidity, hindering performance. Athletes need a high carbohydrate diet ranging from 5 to10 g/KG body weight to maintain energy demand. A plant-based diet gives enough high carbohydrate alternatives, which are very beneficial in terms of endurance performance and high levels of hydration. There are certain other essential nutrients to be taken by athletes for optimal performance, especially those newly shifting to Vegan status. In all the cases, the issue is not lack of resources of the nutrient but slow absorption by the body. These are Iron, Zinc, Calcium, Vitamin D, Riboflavin,

Plant-based food has more iron sources than an omnivorous diet; however, non-haem iron is absorbed slowly in the body compared to haem iron. Haem iron is available in animal-based foods only. Besides, phytate and fiber further reduce the body’s capacity to absorb iron. It can result in a deficiency. So care is needed to ensure adequate reserves of plant-based iron in the body.

Zinc is also very important to ensure optimal athletic performance and is absorbed slowly by the body. Low levels of zinc can affect performance levels. Adequate intake of legumes, grains, cereals, and nuts can ensure normal levels of zinc.

Calcium is another mineral essential for bone health. Its absorption is slow from fruits and vegetables compared to dairy products. Its deficiency can lead to various complications and reduce athletic performance. Various foods like Kale, Broccoli are good for calcium.

The main source is sunlight. So the problem here is for athletes who train indoors, early morning or late evening. Sun exposed. Mushrooms are a great source of Vitamin D.

Vitamin B2 is also very important for enhancing the performance of athletes as it helps in levels of energy and production from fat and carbs in the body. It is found mainly in Dairy, eggs, and meat. However, it is also available in foods like Tofu, nuts, seeds & grains.

So it is felt that Veganism is better not only for the environment, to make this world a better place to live but also for our health in every possible way. We only have to adjust to this new way of living.  The pace at which people have started accepting Veganism will also make more and more people aware of its benefits.

What are the best protein sources?

Beans, nuts, lentils, hemp seeds, spirulina, and quinoa to get enough protein. Products like tofu and tempeh provide versatile meal options and are high in protein.

What vegetables are high in protein?

What are the benefits of vegan diets?

What are the nutrients in vegan running?

Like vegetarians, the main nutrients that may be a concern for vegan runners are omega-3s, calcium, vitamin D vitamin B12 , iodine, iron and zinc, and it might be good idea for runners who are following a vegan diet to have annual blood work done to ensure they aren’t deficient in any of these micronutrients.

What Is Gas in a Vegan Diet?

When you suddenly start to consume significantly higher amounts of beans and legumes than what you’re used to, your body might have difficulty with digestion at first, and you could end up with bloating and gas.

I have one wife, two daughters, and one Doggy. Have worked in some of the best organizations. I am an Entrepreneur and a Change Enthusiast. A Runner and a Blogger. A much-traveled person. I plan to build a huge community of active and fit families around the world now.