Eat Your Way To Better Skin: Acne Treatment At Home 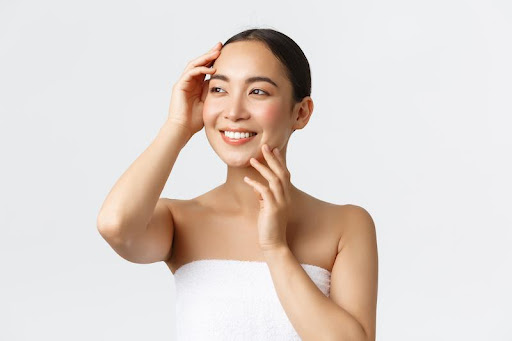 Many of us consider dieting to be the bane of our collective existence, and for the most part, we agree. However, at the same time, we all know that eating well/eating healthily is one of the best habits that we can create for ourselves. They say abs are made in the kitchen, and that a great bod consists of 10% gym and 90% diet, and they are 100% correct.

Not only is the way we eat responsible for how washboard those abs look, but it is also partly responsible for how our skin looks. It’s common to hear or read that drinking water helps clear your skin and remove cold sore scars, but what is there anything else we’re missing as a potential trick?

Can you use dieting to treat skin conditions? Partly, yes, and that’s what this article will be focusing on, and in particular, we’re talking about acne.

Acne affects 85% of Australians aged 15-24, and 9.4% of the global population – an astonishing number. Keratin production, sebum production, acne-causing bacteria, blocked pores, and inflammation as well as hormones, are all factors in what causes acne breakouts.

A never ending debate over the correlation between what you eat and drink and acne has been contentious to say the least, but recently, research has shown that what you eat can play a significant role in the development of acne.

Commonly believed to be a cosmetic condition, acne is anything but that. It is, instead, a chronic inflammatory disease that can present in many forms from comedones (what we know as clogged pores). These can be pustules (the ones filled with pus), blackheads, whiteheads, papules (usually little red bumps), and they can also become big, painful, inflamed bumps called nodules, and cysts (what we see in videos usually operated on by a dermatologist). Acne can appear on more than just the face, appearing on the chest, neck, back and arms as well.

The production of excess sebum (oil) as well as the malfunction of skin cells that line the pores lead to clogged pores, ultimately creating a microscopic blockage referred to as a microcomedone.

The bacteria responsible for acne, cutibacterium acnes, use the sebum as a food source, then replicate and multiply in the blockage, which causes the body to respond with inflammation of the site – boom, zit.

The comedone, or pimple, enlarges to become a visible pus-filled blemish on the skin. Sometimes the comedone bursts, which releases bacteria and pus onto the surrounding tissue to cause even more inflammation, resulting in bumps like papules, pustules, nodules, and cysts.

There are many over-the-counter (OTC) cleansers and treatments aimed to unclog pores, kill bacteria, and kill inflammation. These do not fully clear breakouts because they do not target all the factors that cause cystic acne: oil, sticky skin cells, and bacteria.

That’s where Qr8 MediSkin comes in. Their doctors can customise the best acne treatment product for you – one that targets all the acne-causing pathways to help you manage acne (and post-inflammatory hyperpigmentation at the same time). Clinically formulated treatment can be delivered through telehealth providers, whose doctors conduct video consultations with their patients and directly deliver your treatment to your door.

These are often used in combination with azelaic acid or salicylic acid to kill bacteria and get rid of excess dead skin cells, benzoyl peroxide to reduce the quantity of bacteria on the skin, and retinoids (adapalene, tretinoin, and tazarotene among others), vitamin A derivatives that help chemically remove dead skin cells.

There is a link between milk and increased severity of acne in teenagers. Study show that milk also raises insulin levels – independent of its effects on blood sugar – which may make acne worse. It also contains amino acids that stimulates the liver to produce more IGF-1, which has been linked to the development of acne.

If you suffer from acne, you might notice that your diet consists of a large number of high-carbohydrate foods as opposed to those with little to no acne. Sugar-filled foods cause blood insulin and insulin-like growth factor-1 levels to increase, as noted in a paper from Clinics in Dermatology.

Steer clear of foods rich in refined carbohydrates such as:

Foods rich in vitamin A

Foods that are rich in beta-carotene, which enhance the benefits of selenium include carrots, bell peppers, cantaloupes, and sweet potatoes.

The following foods will help protect your skin from acne scarring and enhance the healing process. These foods are rich in antioxidants, which will also help stimulate skin cell production.

Antioxidant rich foods such as cherries, berries, green tea, and spinach combat the free radicals that cause skin-related problems such as damage and breakouts.

Add oats, artichokes, brown rice, and figs to control acne that is caused by your hormones.

Selenium is a powerful antioxidant found in Brazil nuts, almonds, onion, garlic and whole grains. It helps preserve the elasticity of the skin and reduces inflammation.

Salmon, flax seeds and walnuts are good foods for your skin. This includes omega-3 fatty acids, which help reduce inflammation and heal scars.

A good way to avoid acne breakouts is to limit the amount of pre-processed food. Replace canned vegetables with fresh ones.

Sweatshirts 101: Know The Different Styles & Types Of Sweatshirts For Women