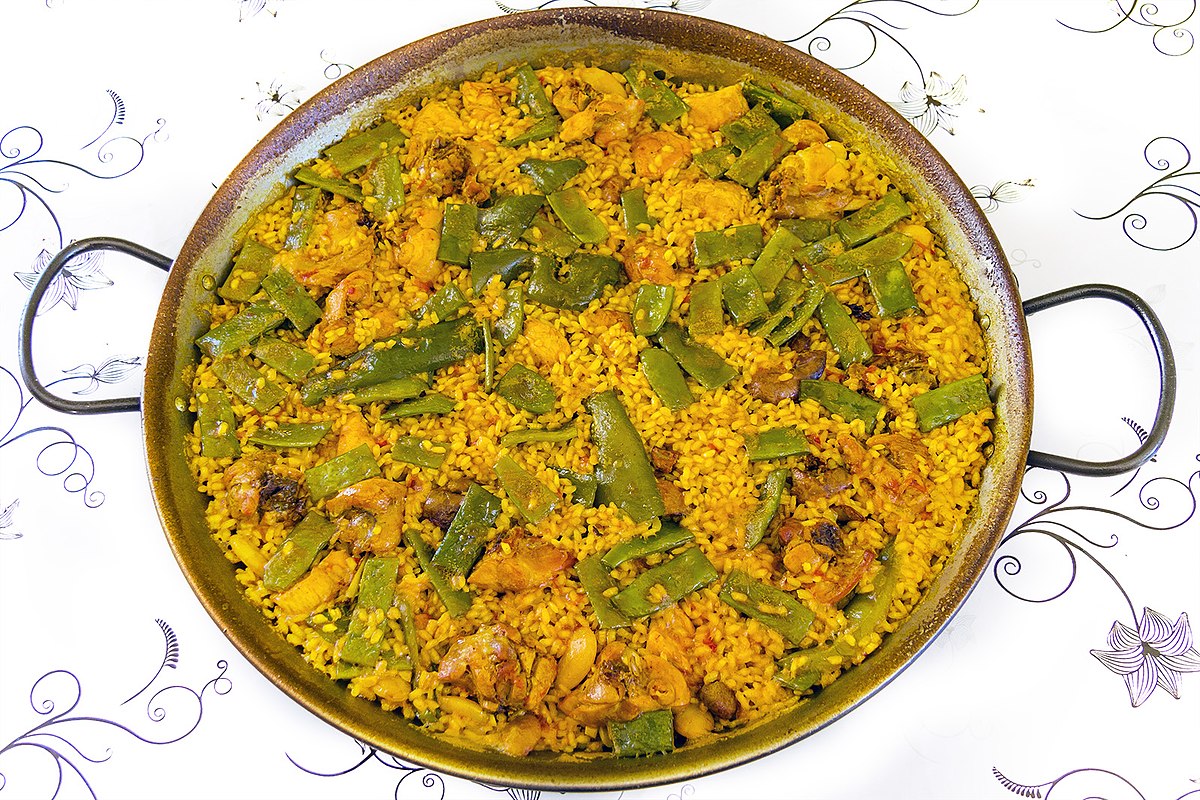 If you’re any kind of foodie, then you must have heard about paella. And if you haven’t, then it’s high time you know more about this star of Spanish cuisine. This rice dish originated in Valencia, Spain, and it gets its name from their word for “frying pan”.

Today, you can find plenty of paella dishes and variants from all over the world. If you’re in any sort of place that was colonized by the Spaniards or has a large Latin community, then it shouldn’t be a problem at all to get a taste of it.

What is Paella, Exactly?

All variants of paella start with rice on a round, shallow, and wide pan. Usually, this is bomba rice, which is a round rice grain that maintains its structure nicely during the cooking process. But any kind of sort or medium-grain rice will do nicely.

Then you season the rice with saffron, which is a rather mellow spice that’s also the reason for paella’s iconic golden color. Finally, you put in some meat or seafood and veggies. Your choice of meat, seafood, and veggies is up to you, and part of the fun of cooking paella is experimenting as to which combinations really satisfy your taste buds.

It all started with the Moors, who controlled the southern parts of Spain back in the day. They started cultivating rice back in the 900s, and by the 1500s, rice was a staple food throughout the country.

As rice became a basic, everyday food option, people started mixing in veggies and pulses. It was originally served as lunch for farm workers (especially the rice farm workers). They just added various ingredients that were readily available at the time. These included onions, tomatoes, rabbit, chicken, and even snails.

They also sometimes put in some dry cod, so it was a great dish to enjoy during the meatless Lent season.

If you’re at a restaurant that serves paella, you have several ways of pronouncing the word. Many Americans just say “pah-AY-yuh” with the silent “L”. But in Spain, they say “pah-EL-yah” or sometimes “puh-EL-yah”.

Paella comes in a lot of versions, and it might even seem like every restaurant in the world has its own unique take on preparing paella. But there are several basic versions:

As the name might clue you in, this is the original version that originated from Valencia. This usually includes chicken and pork along with the rice. Sometimes there’s rabbit in there, but not many restaurants these days include rabbit because not many diners are familiar or comfortable with rabbit meat.

Usually, you also have bajoqueta and tavella green beans, garrofón white beans, snails, and seasonings like saffron and rosemary.

This is also known as seafood paella, and you can get a taste of it easily enough. Try a restaurant like Bahama Breeze, where the Seafood Paella costs almost $18. That’s a very good deal.

The seafood here can include lobster, shrimp, mussels, clams, and squid. There’s usually no non-seafood meat included. It’s then combined with the white rice herbs, salt, and oil.

Back in Spain, it’s a very popular summer dish. It’s a bit “soupy”, which is why it’s listed as “Arroz Caldoso” in some menus. The seafood juices actually add a bit more flavor and intensity to the paella.

This time, it mixes in both meat and seafood. Some restaurants have this listed as “Paella Andaluz.” It’s a very popular version, and it’s probably the most popular version ordered by tourists.

As the name indicates, the paella here is completely black in color. It’s actually a kind of seafood paella, as it uses squid ink to get that black color. Some say that it’s not really a paella at all, even though it’s prepared in a very similar way as other paella versions.

The taste is rather funky for newbies, but locals who have grown up on it really like it. You might like it too if you’re the adventurous type.

This is also known as the vegetarian paella, as it doesn’t have any meat or seafood in it. What it does have is a lot of vegetables. You might find veggies such as green peas, green beans, bell peppers, tomatoes, seasonal artichokes, and/or lima beans on the rice.

Sometimes this is called Arroz con Bogavante in some menus. It uses a European lobster called bogavante, which is why it’s also known as lobster paella. The bogavante gives the dish its distinctive taste that you won’t encounter in the other versions.

Since you generally have rice with veggies and meat, you don’t really need any sort of side dish to go with your paella. But if you want, you can really go all out and pair with another Spanish side dish like pisto or patatas bravas. A light side salad can also work.

What are the Best Tips for Making Perfect Popcorn?

When Can You Find Durian?